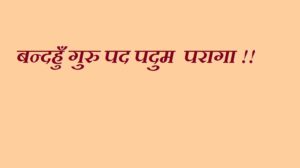 Although Guru is a word that is most revered, it is also the most misused word in the modern times and in the postmodern lingo. Guru is a word that is used for teachers and tutors. Teacher imparting any knowledge, may it be yoga, health and fitness tips, management, or meditation is called Guru. Astrologers, fortunetellers are also considered Gurus. Who is Guru?

Guru is not represented by his physical body. He is a channel, a force representing that eternal source of power. He represents his tradition. Guru does not impart knowledge related to mundane worldly affairs or ‘Apara Vidya’. Guru gives the knowledge that helps the student in the path of the ultimate journey that leads to ‘Mukti’ or salvation. He imparts the knowledge that helps his disciple to free himself from the bondage of karma. The fundamental difference between an ordinary teacher and a true spiritual Guru is very subtle. An ordinary teacher supplies knowledge that is gathered from external sources and given to the student from outside. However, a spiritual guru plants a seed of knowledge in the soul and heart of his disciple which matures in due time. The disciple tries on his part to make it possible by his sadhna. Guru accelerates this process driven by compassion.

There is no other relationship in the world that is as pure and selfless as the relationship between Guru and his disciple. Guru gives him his unconditional love, protection, and support in his internal spiritual journey and in this process the student gets satisfaction in his worldly life also. He bears the responsibility of the well-being of his student in his life here and hereafter. That is why Guru is not only an accomplished spiritual person but also a person full of compassion or ‘daya’.

Physical presence of Guru is not necessary while guiding his student. If Guru casts off his body, when his student is not ready, he does not cease his support and guidance. Their relationship is not restricted to a certain time and space. He continues to guide him in the form of a subtle force. There are so many examples known in the spiritual world when Guru gave direct instructions to his disciples in the same physical form after casting off his mortal body. At the same time, the relationship between Guru and his disciple does not start when he accepts his student formally.

Is there anything that a disciple can do for his Guru in return for his pure, selfless, and all pervading love, compassion, and grace? Is there anything that a disciple can offer his Guru to show his gratitude and love for him? What does Guru expect from his student in return? There is nothing that a disciple can do for his Guru to repay his blessings and unconditional love. In some traditions, when a Guru initiates his disciples, he offers a bundle of dried twigs to his master that is put in the sacred fire at the time of the initiation ceremony. The bundle of twigs represents previous actions and ‘samskar’ of the disciple. This is all that he offers to his Guru. Other than this symbolic offering, he surrenders his ego in the lotus feet of his Guru. He offers his life for the search of sumom-bonum of his life. Guru purifies his ego and makes him realize his true self.

Blessed are those who have the warmth and shelter of the grace of their Guru. However, those who have still to meet their Guru should not find themselves puzzled, worried and disappointed. There is saying in the spiritual world that when the student gets ready, his Guru unveils himself. It is a task of a Guru to keep track of his student and to adopt him when time ripens. A true Guru protects his student in his spiritual journey as lovingly, painstakingly and effectively through several lifetimes as a mother bird protects her eggs. A disciple’s task is to prepare and mature himself for that very day. All a disciple can do is to let the fire of knowledge kindle in his heart, let the longing to find his true self grow.